In the Headlines – Week of February 15th

In the Headlines – Week of February 15th

As investors we are taught to remove emotion and politics from our investment strategy. Instead, we want to focus on what we can control when it comes to investing and financial planning; block out the noise.

This would be an easier task if we weren’t living in a world of “hot-takes” and 24hr news cycles. BUT since this isn’t something that is going anyway any time soon we must weed through the noise and focus on our individual plans.

So let’s dig into some headlines, ask some questions and see what February has had to offer so far.

If you were wanting January’s market excitement to spill over into February, then I would say you got your wish. 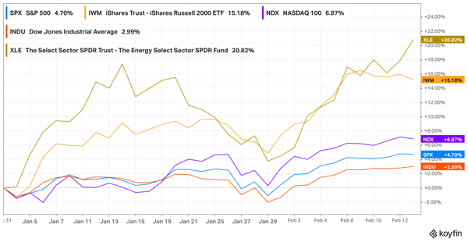 It feels like every asset class is going up every day and when that isn’t the case, the investment world is confused and wondering what is going on. Performance expectations are no longer realistic and most of the world has become complacent.

So, what should we do? When will things “normalize”?

When it comes to risk tolerance and figuring out what percentage of someone’s portfolio should be aggressive/stocks vs conservative/bonds and cash, we steal an old rule of thumb from Warren Buffett…If you think you will need the money in the next ten years then do not take stock market risk with those dollars.

This is a conservative way to look at asset allocation, but at the same time I would say that it’s customizable.

If you believe your situation can tolerate a higher level of risk and volatility, then you can back down the 10 year threshold to a number between 5-7 years. This may be the case if you have strong job security, consistent budget management, or a low level of debt relative to your income or savings. But I do think 10 years is a good place to start.

As for things going back to “normal”, I think the natural follow-up question is, “What’s normal?”

I believe this goes back to “blocking out the noise” and focusing on what you can control. History will tell us that over time stocks go up, invest now versus later and diversification will help survive the crazy times.

Let’s take a quick look at the last couple weeks. We’ll fly through a few topics that have dominated headlines and continue to trend as of Thursday morning.

If you are wanting more on any of the following topics, check out the links at the end of the post.

The House moves to finalize the next stimulus package by the end of next week. The same questions continue to dominate the debate. Who should get it and how much should they get for how long?

Without a doubt there are individuals, families and businesses hurting right now. Some already bankrupt and needing financial assistance in order to get bac on their feet. Others on the verge of bankruptcy. There are still more than 10 million more workers unemployed than before the shutdown. I would argue that number could increase without more stimulus. I think businesses are banking on it and keeping workers on the payroll while they wait.

What could be in the package:

Vaccine numbers are up. Hospitalizations, positive tests and deaths are all down. Although we still have a long road ahead, the data is trending positive and it has been for weeks. The economic recovery is banking on this trend continuing. What matters the most? I would argue it’s vaccines per day. We all want things to go back to normal as quickly as possible. This happens when we have the majority vaccinated and heard immunity is reached. Since heard immunity by itself is still months away if not longer, the vaccine should be able to pick up the slack. We are currently trending towards 2 million vaccinated per day. If we can get there, while the country slowly warms up and gives people an easier way to socially distance, we could surpass 100 million vaccinated by the end of April. “So far, 40.2 million have received at least one dose. At least 15.6 million people have completed the two-dose vaccination regimen.”- Bloomberg 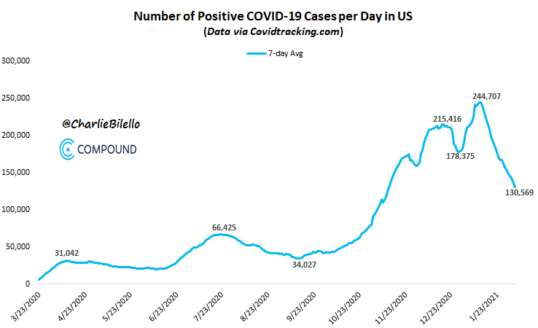 Why is just about every asset and asset class going up? I believe the two big drivers are what you just read. More stimulus and positive trending data around COVID. If that isn’t enough for you then how about interest rates kept near zero, strong corporate earnings, 6% expected GDP growth and nowhere else to invest your money if you are wanting to beat inflation (which is expected to rise). “Once the US Government finalizes and implements the next $1.9 trillion stimulus package, they will have increased the US dollar supply by 40%. Think about that for a second. There will be 40% more dollars floating around in the economy.” – Anthony Pompliano. 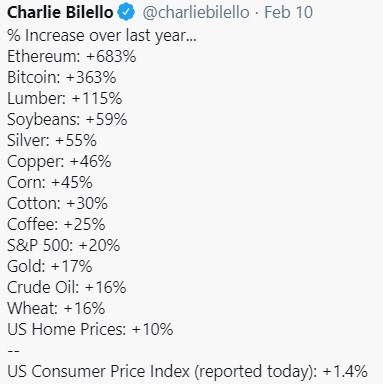 Will some of that 40% increase be stashed away in a savings account? Yes, but what we learned from last year’s large stimulus package, the majority of it will be spent. The question will continue to be how much is too much and for how long can we do this?

What else is up? Investor’s appetite for risk may be nearing new heights. The amount of new capital being raised through companies going public is intense. The IPO and SPAC markets have gone bananas. Remember, a SPAC is essentially taking a huge pot of money public before it ever owns a revenue generating company.

“Repeat after me: That sounds stupid, I’m buying some just in case.” – Josh Brown 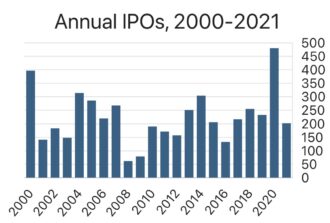 One of the largest companies in the world just bought $1.5b of Bitcoin. “In an SEC filing the company said it bought the bitcoin for “more flexibility to further diversify and maximize returns on our cash.” (CNBC) This morning Bitcoin is trading above $51k for the first time in history. Bitcoin’s 5 year return is well over 12,000%.

What’s next for the leading cryptocurrency? No one knows. But we are seeing more and more institutions participate and adopt. 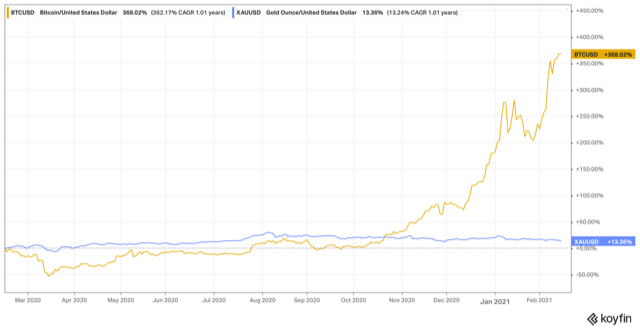 “The more infrastructure that’s built around this, the more likely it is to never go away… we’re at a tipping point now where Bitcoin is here to stay. It’s going to end up being in every institutional investor’s portfolio.” Anthony Pompliano, co-founder of Morgan Creek Digital Assets

At Vantage we continue to look at Bitcoin as a speculative, highly volatile investment. Does that mean we think you shouldn’t touch it? Not at all. But it is not for everyone. Momentum and popularity are at all-time highs for crypto assets and this is being reflected in the price action. FOMO (fear of missing out) is spreading wild. So, if you are someone that is doing everything right financially and you want to speculate with a small percentage of your portfolio that you could afford to lose, then personally I don’t see anything wrong with speculating with this small portion of your portfolio.

GameStop mania → Is it over?

It was hard to choose between all of the insane charts that illustrated the craziness. As of February 18th, GameStop shares are trading at roughly $45 per share. On the same day, the Committee of Financial Services of the House of Representatives will hold a hearing regarding recent market volatility in a number of stocks, including GameStop. 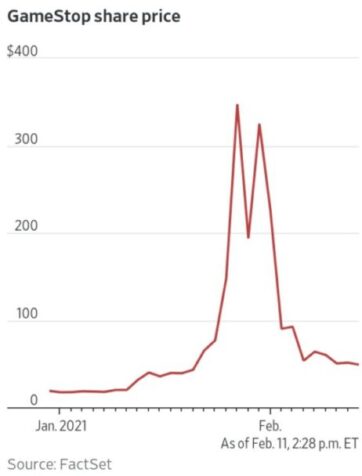 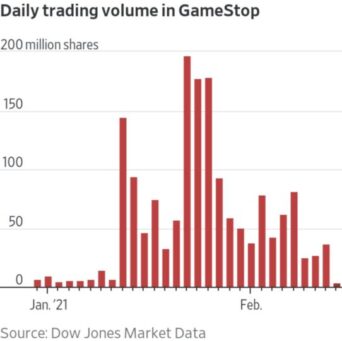 Inflation → Is it going to kill us all?

Some folks have been worried about inflation for a very long time. These worries have shaped their strategies and guided their actions over the last 20+ years. Now, inflation expectations are rising while more stimulus is on the way. Are there lessons to be learned from the past? 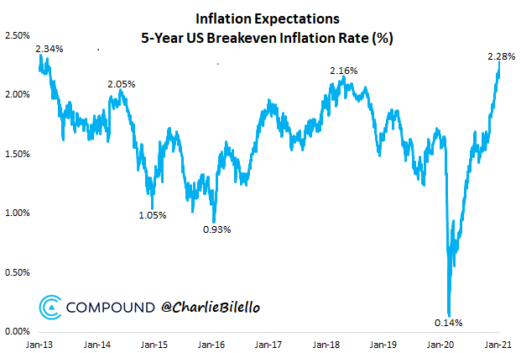 “Inflation expectations are simply the rate at which people, consumers, businesses, investors — expect prices to rise in the future. They matter because actual inflation depends, in part, on what we expect it to be. If everyone expects prices to rise, say, 3% over the next year, businesses will want to raise prices by 3%, and workers and their unions will want similar-size raises. All else equal, if inflation expectations rise by one percentage point, actual inflation will tend to rise by 1 percentage point as well.” – David Wessel 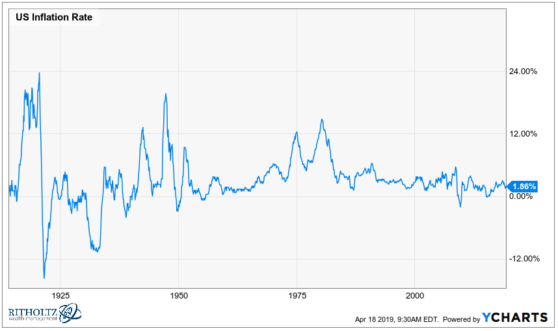 “It’s difficult to estimate the magnitude of the inflationary and interest rate consequences of the Fed’s actions because, frankly, we haven’t ever seen anything like this in the U.S. To date what’s happened is potentially far more inflationary than were the monetary policies of the 1970s, when the prime interest rate peaked at 21.5% and inflation peaked in the low double digits. Gold prices went from $35 per ounce to $850 per ounce, and the dollar collapsed on the foreign exchanges. It wasn’t a pretty picture. – Arthur Laffer, WSJ – June 11, 2009 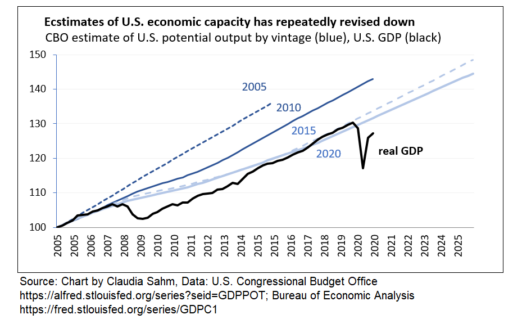 “Ten years ago, 23 economists penned an “Open Letter to Ben Bernanke.” They told the Federal Reserve Chair that its accommodative policy’s risked “currency debasement and inflation”. I remember that stupid letter as a macro forecaster at the Board. How could they? One year after the recession ended, when consumers, were struggling to come back. When the letter ran the unemployment rate was nearly 10%. The Fed stayed the course to help Wall Street: they bought more assets; keep interest rates low; and stock prices rose rapidly. Political risk and inflation fears stop the Fed from saving Main Street. They did not have the courage to act. – Claudia Sahm, Stay-At-Home Macro

We’re at the Tipping Point

Why talk about inflation?

The Investigation has Begun

Do you need a plan for your finances?

Are you thinking about retirement?

Do you have questions about your benefit options?

Schedule a complimentary call with an experienced financial planner.